Both Drs. Costello and Meyers are certified “Train the Trainers” for National Milk Producers Federation’s FARM 3.0 program, including the important animal welfare aspects.

During the workshop at the Willow-Behrer location, 15 employees from five area dairy farms attended and engaged with the topics and trainers and were provided with certificates for the content areas covered.

Before breaking into groups, Dr. Meyers conducted a mammary dissection with Martinez providing Spanish translation for his demonstration as he showed employees various aspects of the mammary gland and demonstrated proper administration of intramammary treatments, including dry cow treatments, so they could see, for example, how far into the teat canal to go.

The workshop participants then split into two groups for the afternoon hands-on session, and rotated between the milking parlor with Dr. Costello and the freestall pens with Dr. Meyers.

In the freestall pens, the attending employees learned and practiced Dr. Meyers’ tips for quiet, calm separation of individual cows from a group. He demonstrated first, with bilingual translations by Martinez and gave each employee an opportunity to do the exercise. 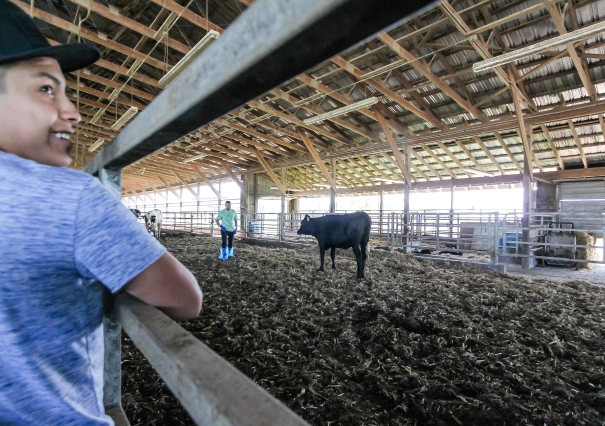 The atmosphere of competitive camaraderie was apparent between the mainly Hispanic employees as each quietly achieved the objective of sorting a specific cow from its group without using hand gestures or voice, just body position.

With hands in their pockets, as Meyers instructed, each participant used the position and angle of his body to signal the direction the desired cow should go. They were all quite impressive and proud of themselves.

In the parlor, employees learned the basics of milking equipment and things to watch out for that affect sanitation, udder health, teat end health, and milk quality.

These workshops also gave the employees the chance to practice identifying issues with the CMT and strip cups as well as a conductivity meters like the Mas-D-Tec.

Employees from the various farms were enthusiastic and engaged in discussion with each other and presenters, making for a dynamic day of learning, practice, and improvement.