CHRISTIANA, Pa. — Not everyone would choose a 40-cow tiestall barn to “move up to” when building their dream barn. But for this young dairyman, it’s just the ticket.

“I’m happy with my decision because I feel I am able to care for the cattle a lot better now,” says Rusty Herr of Golden Rose Genetics near Christiana, Pennsylvania. “I can give them more individual attention, and that’s what I wanted.”

And can we just say it? This Lancaster County, Pa. barn is beautiful. Breathtaking in fact.

Last Friday, October 21, over 500 people came out to see it for themselves during the Open House at Golden Rose Genetics, organized by Rusty and the builder and subcontractors.

The Golden Rose tiestall project — from financing to construction — had been planned right down to the minor details.

Rusty had coordinated his dispersal sale of 175 cows (3/4ths of his herd and pretty much the best of his best) to occur last November in conjunction with moving the now smaller herd out of the former freestall barn and into their new digs, which E&F Ag Systems had ready for them by November 1, 2015.

Since then, the new all-wood construction, Canadian-style tiestall barn has provided all the cow comfort and individual hands-on management perks Rusty was looking for  — from the stall design and tunnel ventilation to the indoor washroom and loads of natural light.

Before construction began, Rusty visited tiestall facilities in Canada and Vermont for inspiration. One of the barns he visited was Lookout Holsteins in Quebec, where Callum McKinven and his family have both Holstein and Jersey cattle.

Callum’s stall design captured Rusty’s attention, and so he adapted the idea of transitioning the stall sizes from large to small to accommodate differently sized animals. Callum grew up with Jerseys, and his wife with Holsteins. The McKinven family is involved with both breeds and designed their stalls accordingly.

As for the Herr family, Rusty’s daughter, Allison, introduced Jersey cattle to the Golden Rose Genetics’ stable of Holsteins seven years ago. The idea to use tapered front curbing to adjust stall sizes makes both breeds feel at home. The stall sizes are grouped by fives at 48, 52, 56 and 60 inches with the two rows mirroring each other. This smart use of space accommodates the placement of four box stalls at one end of the barn.

While visiting Lookout Holsteins in Quebec, Rusty also saw how Callum McKinven deep beds his stalls. Rusty decided to do this at Golden Rose — instead of using mattresses. He deep beds mainly with straw, and some additional shavings. A thin strip of rubber at the front of the stalls keeps the cows from digging out the bedding.

One of the most obvious features of the new barn is that is made completely of wood with a rough-cut pine exterior.

The interior of the barn is smooth pine of tongue-and-groove construction — using three different wood widths in a random pattern. All the interior wood has been clear-coated with polyurethane to protect against the moisture.

“We can wash it right down,” Rusty says.

The barn also has lots of windows “because we wanted plenty of natural light for the cows,” he explains, adding that the entire facility is tunnel-ventilated, but on nice days when the tunnel is off, the windows are open.

It takes a special builder to work with a dairyman who wants a building that doesn’t fit the trends and that requires new thinking. “E&F listened to our ideas and worked with us,” Rusty reflects. “They made sure we were happy with the final product.”

He notes that Steve Esh at E&F “is a great guy to work with, and if something wasn’t how we wanted it, he was quick to make it right.”

Rusty is thankful to everyone who played a part in the project from start to finish. “We were under a tight deadline with the November sale last fall, and Steve promised they would have the barn ready by Oct. 30, and they did.”

He is especially thankful for the “foresight and vision” of his former herdsman Jonathan Pinkerton as he helped in the new barn’s design.He also has high praise for Brandon Umble, who did the excavation, and for subcontractors H.W. Martin, Earl Musser Plumbing, Leinbach Electric, JBZ Dairy Advantage and Georgetown Stoneworks.

“But none of this would be possible without Lamar King and Fulton Bank,” Rusty adds. “They kept the process simple to get everything coming together in terms of the financing.”

While Rusty admits some people may walk in and feel the barn is “overdone,” the young dairyman — with an eye for cattle and a passion for genetics and cattle care — made wise cattle investments. He used his previously growing herd as the piggy-bank by building up his cow numbers and their genetic value, and then selling most of the herd to raise the hefty chunk of money to put down on his dream barn.

“This is our dream. I didn’t want to build something and later have regrets,” Rusty notes. “The milk market is not reflective of this type of building, and it cost more than it needed to, but my intention was that if I do it, if I build a barn, I wanted to do it right and do it now. I wanted a facility for the cows that when people drive in the lane they are looking at something that does not look like a dairy barn. I want people to be curious about this barn before they even get to the property.”

Of the 44 milk cows, three are Jerseys from the first cow purchased by daughter Ally seven years ago. They flushed her and got the embryos to start the Golden Rose Genetics Jersey line.

Now in the new barn with a smaller herd for one year, Rusty is digging back in to gradually building up the genetic lines and cow families he is working with. But he is not in a hurry. Right now he’s enjoying the dairy life and caring for the cows with his family.

From a practical standpoint, Rusty wanted a facility where he could do everything himself, with just his family, given the market conditions of the dairy industry and uncertainty about being able to hire help in the future. In fact, his recent trip to World Dairy Expo was the first couple nights he was away from the dairy farm since the move. His family manned the fort.

From a philosophical standpoint, Rusty wanted a facility with a bright environment where he would enjoy working and where he could treat every animal like a queen.

Among his comfort protocols for those queens is to start fresh heifers with Udder Comfort. He likes breeding and having healthy cattle that last. Udder Comfort fits that philosophy by supporting the cow and the udder, after calving.

“I had tried udder products before, but I didn’t see much effect, so I was surprised when I tried Udder Comfort for the first time a few weeks before the sale last year,” Rusty recalls. “We had quite a few fresh 2-year-olds selling, so I started using Udder Comfort 2x/day for a week on those animals, and it really brought out the quality and potential of the udders. We typically don’t have much edema in our herd, but the overall quality of the udders was still noticeably improved. I see this routine definitely bringing any visible swelling down faster than anything else, and improving udder quality when used across the board on first-calf heifers.”

Last November, Rusty sold a lot of his better cows and first-calvers to downsize the herd for the barn. “We wanted to sell from our best.” he explains. “We actually kept more of the recipient cows and average cows as well as a small group of foundation cows to gradually work our way back into the genetics.”

So, it’s not like Rusty has a barn full of high-scoring cows — yet. He believes every cow demands the individual attention he prefers to give in this new barn and smaller herd. 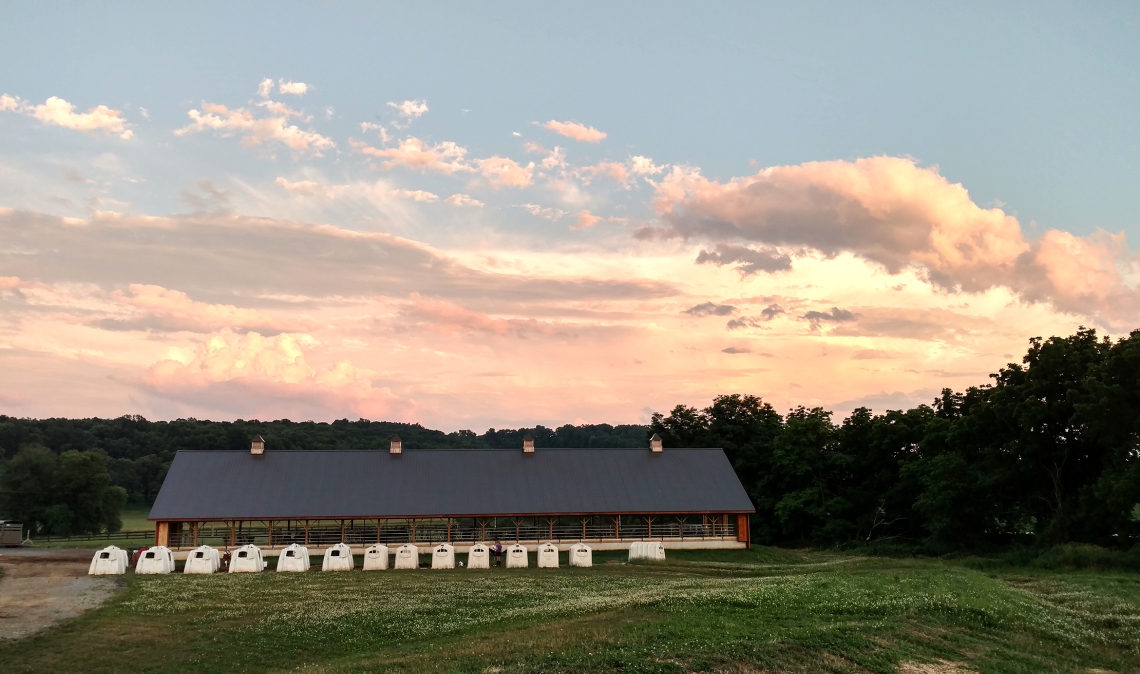 “The whole thing — that we’re here — is still surreal some days,” the young dairyman relates. “There are still days where things don’t go well, no matter what kind of facilities you are in. Whether it’s a good day or a bad day, they are all better because now I can care for the cows the way I have always wanted to, to maximize their potential. And even though there is more work, it is work I can do with my family so I get to see my family more than before.

“It’s like walking out of the dark and into the light, into a totally different cow-care environment.”

Most photos provided by Rusty Herr